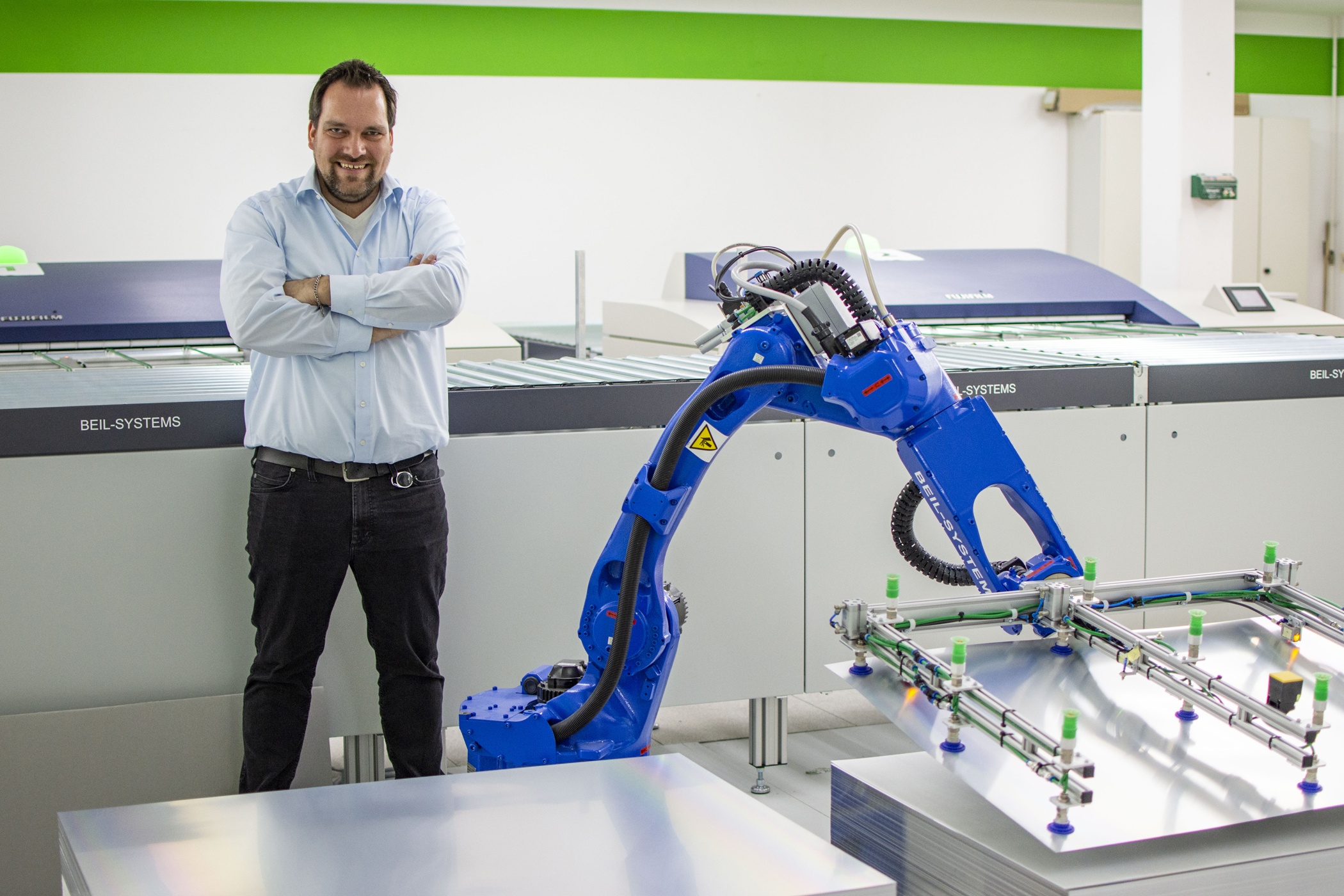 Meinders & Elstermann is a family-owned company with a 135-year history and a fully-equipped print shop with a solid foundation. At the site in Belm (near Osnabrück), around 150 employees are working on three 8-colour and one 10-colour sheet fed offset press as well as a state-of-the-art bookbinding shop. Their material workflow is constantly upgraded and a  key area where an upgrade took place a few months ago was in plate production, where plate logistics was redesigned together with BEIL Systems.

With its state-of-the-art machinery, the M&E printing house is able to realize very high-volume and complex orders even within a very short time. Depending on the customer’s requirements, the manufacturing depth can cover all stages of production – from the creation of the data to the final letter shop work.

The introduction of a new MIS system in 2016 was already carried out with the idea of a future full network integration of the entire company. Two years later, the production planning and control systems were updated, and, among other things, the classic paper-based process was quickly obsolete. The interconnection of all machines was critical , in order to communicate and process all necessary information for production.

A spatial change made a replacement of the previously used plate production line necessary, as there was already considerably less space available during the planning. Whereas before classic thermal plates were still in use, these were now replaced by process less plates in the sense of ecological thought.

The highest possible automation is sought

Due to the ever-increasing and faster advancing versioning into short runs, the number of printing plates required and the associated requirements for in-house logistics have increased significantly in recent years. This necessitated a more reliable and simpler solution of producing printing plates.

In this way, the time spent by the employees for making plates is to be reduced. These were relatively high in the old configuration with a multi-cassette loader and a skid loader as well as the manual charging of the shooters.

The M&E printing house wanted the highest possible automation of all process steps and the possibility of running the system independently without personnel. Of course, reliability was also a big issue, as was plate throughput. While the supplier was retained for the CTPs, M&E Druckhaus was looking for a new, strong and reliable partner for the logistics of the plates. BEIL Systems was also able to convince with an innovative solution for feeding plates to the CTPs. Beil was chosen because of their experience with lights out automation and unique design build capabilities.

This concept includes a 6-axis robot in the plate production at Meinders & Elstermann, that can pick up the plates from different pallets deposit the interleaving paper in a paper box, and place the plates – without touching the emulsion layer – precisely on roller conveyors that guide the plates to the imagesetters.

After the two image setters, the plates are also fully automatic processed in a bending machine for the Heidelberg Speedmaster XL 106 and then sorted in one of the ten available stacking positions. The bin stack assignment takes place according to the previous disposition per printing press via a direct interface to Prinect.

During the entire process, the printing plates are scanned and tracked via QR-codes readers. Depending on the throughput of the exposure units, the bending machine could handle up to 210 plates per hour. 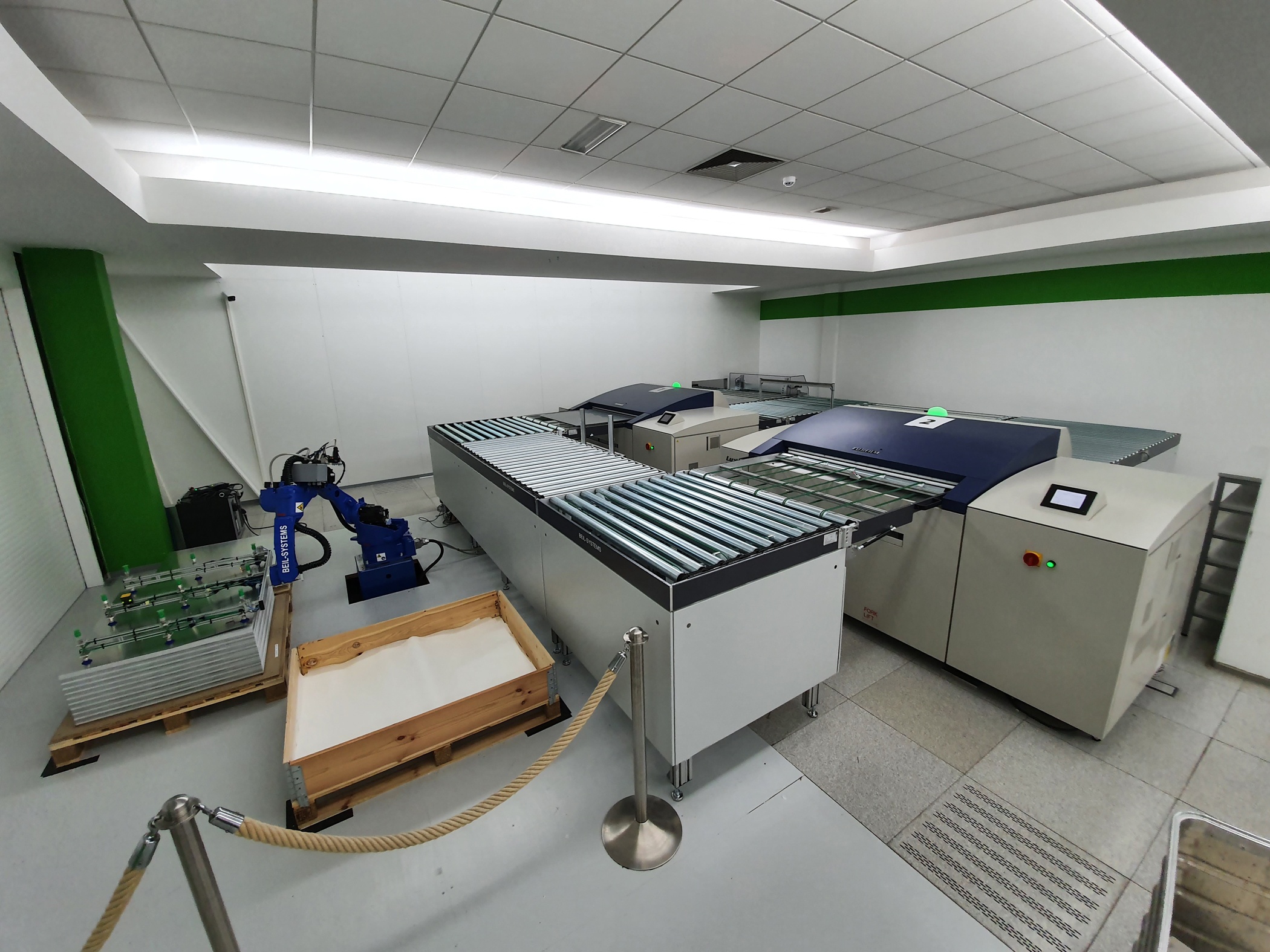 In operation since September 2020

The order was placed in spring 2020 and the commissioning in Belm planned for Drupa 2020. Among other things, the COVID crisis delayed the construction and eventual commissioning until August. With the complete dismantling of the old equipment, the new system was finally fully put into production in September.

For the employees, many things were new – not only the technology, but also the new processes in a changed spatial environment. In many areas, the new workflow now saves significant time.

The pure exposure capacity increased by 12 plates per hour, and many labour-intensive setup times were omitted when the system is set up.

If plate demand continues to increase, the system can be extended by another CTP.

After start up adjustments were made, according to a prepress manager Marco Rassfeld, production is now partly completely self-sufficient. The upstream and downstream processes have also need optimized and now the overall production efficiency shows significant improvement. Marco Rassfeld: “Communication is always very constructive and solution-oriented, so that you work together on the project and develop the project further together. The coordination with the other suppliers was also going without problems and was and is absolutely solution-oriented.” Implementation of crucial custom automation requires shared goals and cooperation between customer and supplier. BEIL Systems excels at delivering automated solutions with and for their customers for over 40 years now.